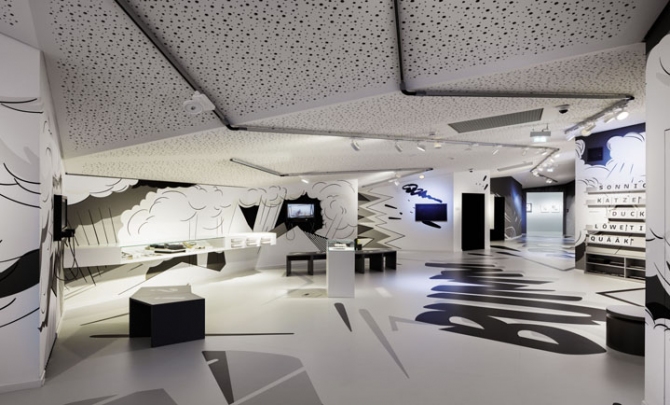 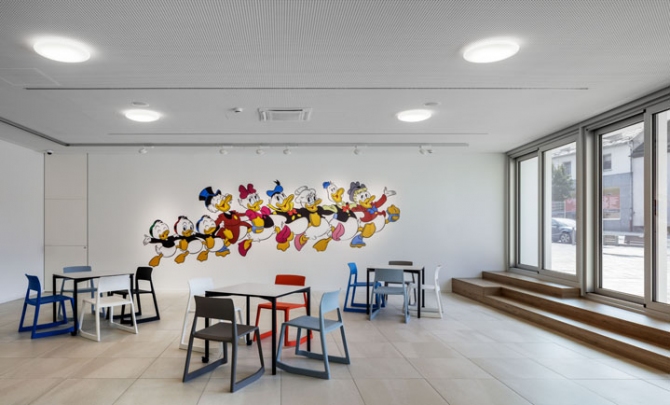 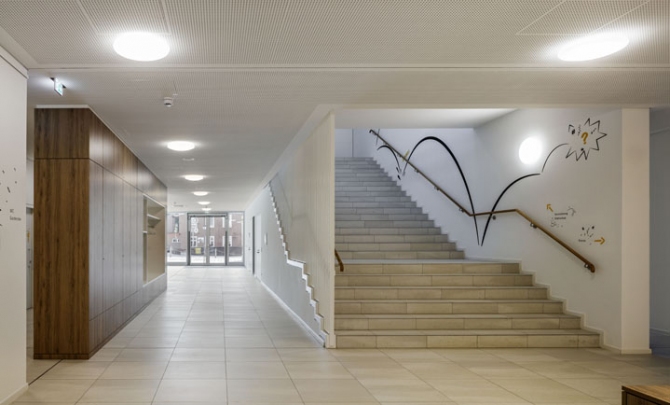 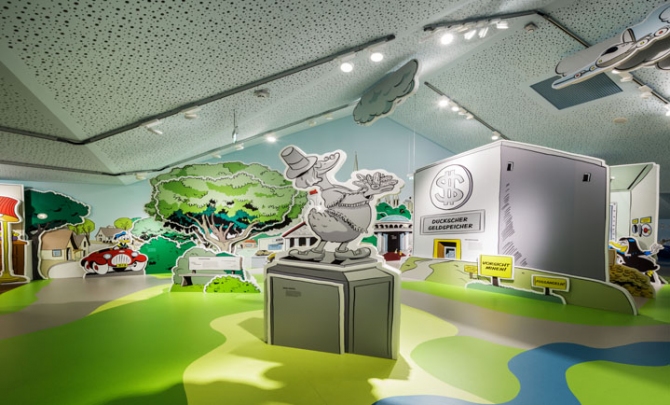 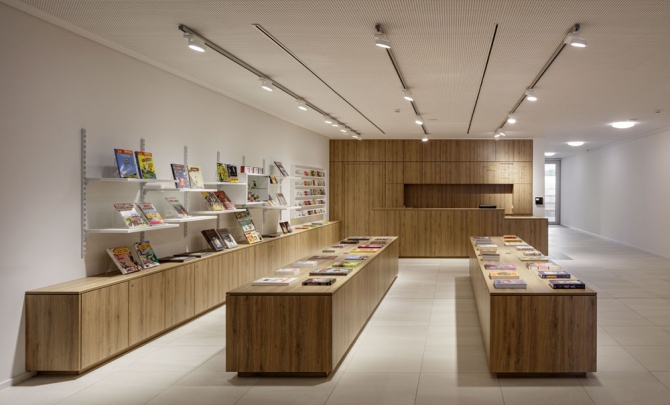 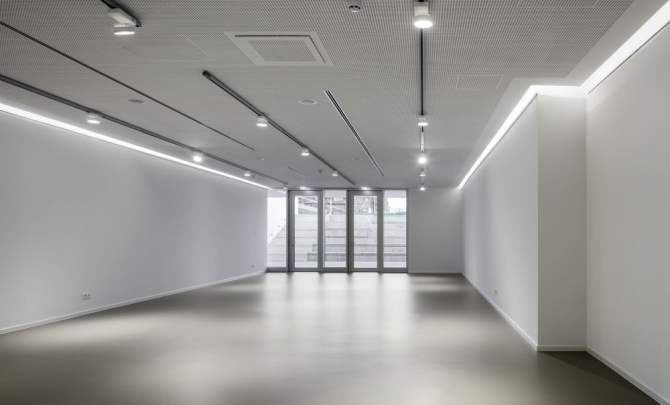 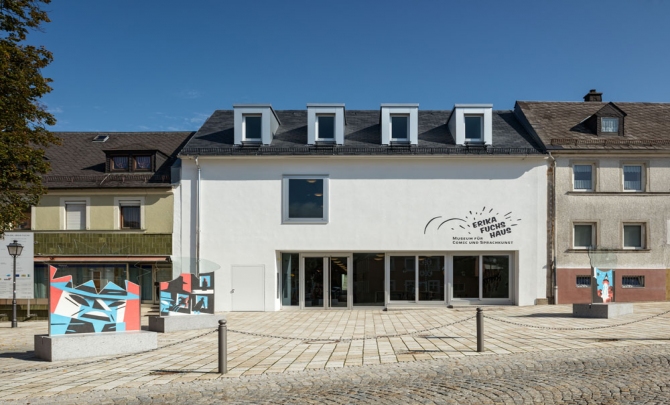 The new Erika Fuchs Museum | The Museum of Comic and Language Art in Schwarzenbach an der Saale is an informative meeting point for the friends of Duckburg and its inhabitants. Various acoustic design ceilings by Vogl Deckensysteme have been installed in the building. The folded ceiling on the upper floor is the ultimate eye-catcher.

The museum with its large panoramic window is situated at Max Square only a few steps away from the city centre. Thanks to its cubature, the centrally located building with its vegetated roof fits into the streetscape - as though it has always been there. Graphics mounted on pedestals invite the visitors to enter.

With this new building, the town of Schwarzenbach an der Saale pays homage to its most renowned inhabitant: Dr Erika Fuchs. The art historian with a doctoral degree lived here from 1933 until 1984 and rose to fame with her brilliant word creations filling the speech bubbles of the Duckburg comic cartoons for over 40 years.

The requirement of the tender competition was to design an exhibition building with rooms used for both permanent display and sideshows as well as integrated into administrative and storage areas. The building encompasses a gross floor area of 1,537 m² and a main usable area of 931.90 m². Its interior reflects the life and work of the famous writer, and its refreshing atmosphere makes it a popular meeting point of comic enthusiasts.

The challenge of the Architectural Competition 2011 was to accommodate all areas and making the building an integral part of the surroundings. The winner was architect Dominik Burkard of Planungsbüro für Baukunst, an architecture firm based in Karlsruhe. He was put in charge of implementing the project. ghsw Architekten, an architectural office based in Hof, was responsible for the construction management. The exhibition concept was carried out bytheBerlin-based firm m.o.l.i.t.o.r. ART IN MOTION.

After three years of construction, the multi-storey building opened its gates in August 2015. Owing to its energetic concept, the exterior shell consists of a thermal insulation composite system with mineral wool and an exterior plaster with a blurred, one-millimetre-thick scratched plaster layer featuring random-pattern glass splinters that obtained white paint coat.

The ground floor already welcomes visitors with a flowing spatial sensation. The main entrance is situated in the south-west and leads to the open-air area in the north-east. The spacious shop and cash-desk area as well as the sideshow and the classroom form a central point.

In the entrance area, drywall installer Markus Opitz (M & M Innenausbau, Berg) opted for the acoustic design ceiling system with air purification function, GSG4 joint system: Ingeniously swift screwed design with integrated light elements and access panels. GSG4 is an enhanced procedure of compound seam characterised by four sturdy butt edges forming a rebate surrounding the acoustic design panel. The product – available with all conventional perforation patterns – offers the installer the advantage of quick installation and less filling effort. Moreover, sturdy butt edges allow for less waste at the borders. The butt edges are ready for finishing, i.e. chamfered and primed ex factory. The user-friendly product has been developed from practical experience for practical use and, as is the case with all ceiling systems, it is first mounted to a rigid, even ceiling framework edge-to-edge starting from the middle. Should any height offset become visible during follow-up inspection, the screws can be readjusted if necessary and the joints are finally filled by means of a cartridge.

A vast main staircase leads to the permanent display on the upper floor where the tour through the museum continues. There is also a passenger lift that connects the floors with each other. "What is so special about the new building is that: The axis on the ground floor is designed as a public hall connecting the public Max Square on the front with the seating steps located at the rear of the open-air area. This axis interlinks all the main rooms. The exhibition on the upper floor forms an enfilade with five rooms. The window on the first floor establishes a visual connection to Max Square. The administration forms the head of the building and is accommodated under the roof. The most distinctive feature is the folded roofscape referring to the museum spaces situated below," says Dominik Burkard.

The upper floor is adorned with a folded VoglThermotec ceiling, featuring the compound seam system. It is the solution of choice to provide temperature regulation along with perfect acoustic performance. The ceiling not only inspires with its pollutant-absorbing design, it also features a remarkable thermal conductivity of λ ≥ 0.25 W/(m*K). The installation of the gypsum plasterboard panels was rather challenging. As architect Dominik Burkhard puts it: "Even though there were a lot of built-in components and constraints with regard to the installation height, we successfully implemented a ceiling plan as featured in this folded roof. Thanks to its design, it complies with all technical requirements where the effect of space is paramount." To make sure that the ceiling triangles fulfil their function in terms of climate control, the parts were first measured and individually made by the manufacturer as moulded components. Armin Götzinger, the project consultant in charge from Vogl Deckensysteme, also recommended that the ceiling surface should be implemented with shadow gaps, since the ceiling system is exposed to hot and cold temperatures resulting in increased contraction and expansion.

After the environmentally compatible gypsum plasterboards have been mounted to a rigid, even ceiling framework, a cartridge is loaded with the ready-mixed filling compound, and the joints are filled generously. "In order to achieve maximum joint strength, the joint must be completely filled with the filling compound," says Benedikt Roos, Product Manager with Vogl Deckensysteme. Before the compound dries and hardens, any protruding material is removed with a spatula. In the next step, the drywall construction specialist covers the rows of perforation next to the joint with adhesive tape. Now the joints can be refilled with finishing material. Any holes clogged with joint compound can be re-opened using a perforation wheel. As soon as the joint filling compound has completely dried, this area is subsequently smoothed with a hand-held sander.

The room-closing elements by Vogl Deckensysteme are absolute eye-catchers and as such they increase the value of the building through form, colour and functionality.