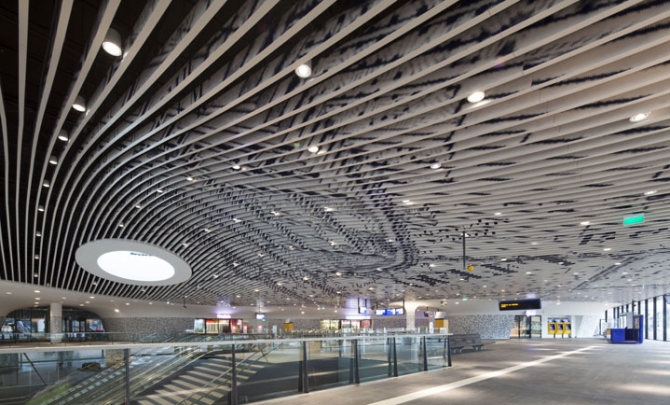 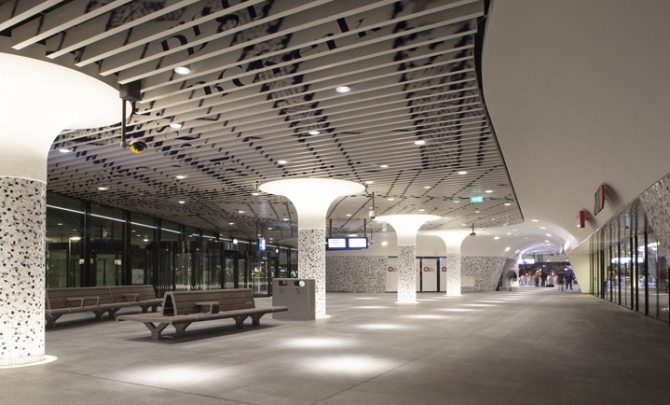 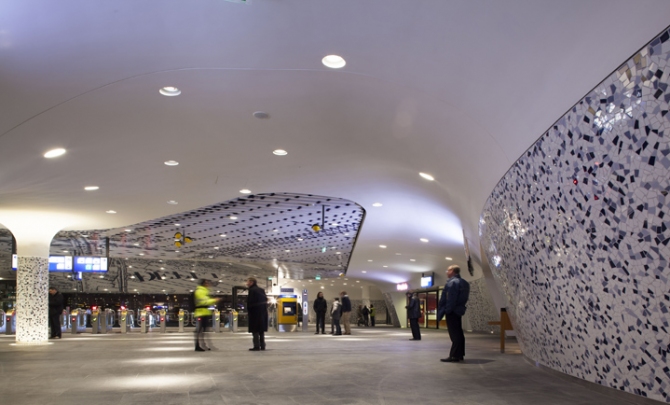 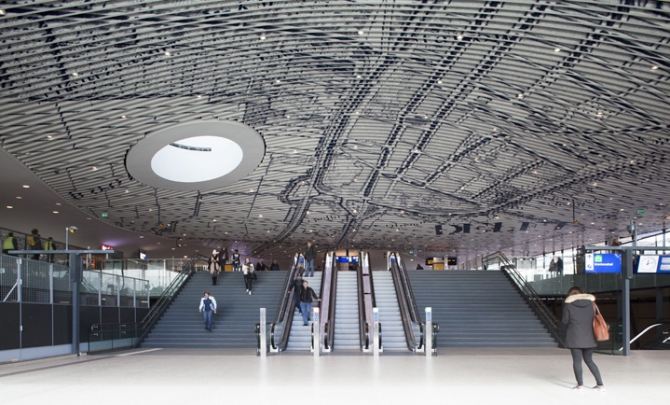 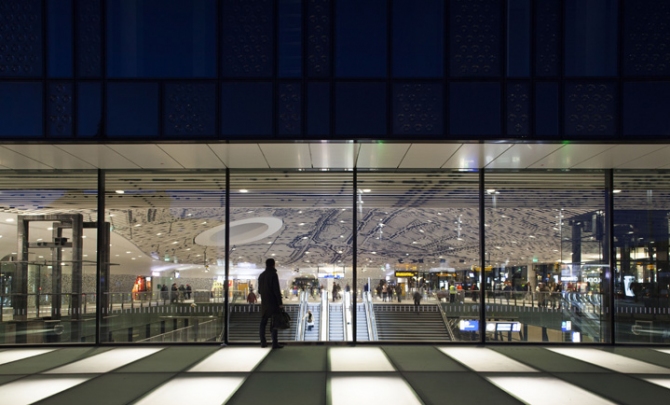 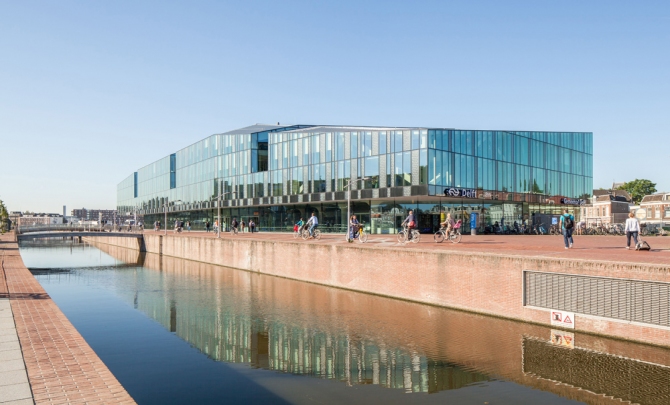 The railway station in Delft is a complex building and a masterpiece of architecture and drywall construction alike. What strikes the eye is its ceiling with the substructure based on framework technique. Both the individual metal-sheet grids and the required moulded components have been manufactured by Vogl Deckensysteme.

Even the external appearance conveys a striking message of shapes and forms, and blends harmoniously with the surroundings. The complexity of the entire building area is composed of municipal administration with office rooms (16,500 m²), courtyards, a public lobby (2,250 m²) and a railway station concourse (2,450 m²) including retail shops and eateries (850 m²). The development of this compact yet extremely efficient building complex was due to a continuous design process divided into different construction phases.

A look through the glazed entrance area takes the travellers up to the breathtaking ambience. The ceiling design has been partially realised in the form of a baffled vault ceiling. It reflects the duality of this city: History and future-oriented technical innovation. Francine Houben, the architect in charge from the architectural office Mecanoo (based in Delft, New York, Kaohsiung), created the draft of an expressive dual ceiling image. It shows the "View of Delft" after a painting by Johannes Vermeer that depicts the old railway station of 1877, and reflects the past and the future. This way, tribute is paid to the famous "Prinsenstad" (the Prince's City).

Some people see no more than the floor and the walls. But what about the ceiling? It is far more than just a spatial enclosure – it defines and embraces the room. The room-closing element in this building serves a number of purposes: Orientation, decoration and integration of technical facilities. It has an astonishingly smooth and seamless impression that conveys the feeling of a continuous public space. Stylishly rounded columns breathe life into this "railway theatre" and make it seem transparent.

To make a 3D model later, a 2D draft had to be prepared first. As early as during the drafting process, it proved quite a challenge to arrange those three-dimensional curved shapes over an area of 1,600 m². All participants in the project were involved in the entire construction process from the very beginning. "The architectural office, the installer and our company were in close dialogue with each other during the entire construction project," Olaf Thiele, head of marketing & sales at Vogl, praises exemplary communication. At the same time, he emphasises the fact that individual framework elements were manufactured in the company according to architectural specifications. The required experience is available, since the ceiling manufacturer has its origins in tool and machine construction. The interfaces were then completed on the CAD basis.

The framework is formed from curved metal sheets (frames) consisting of custom-made grids. A template for geometric determination of adjacent wall surfaces was an important means of frames processing, since subsequent measurement at the construction site was not possible.

The frame technique that originated in shipbuilding is used in architecture when, for instance, curved open surfaces need to be joined together. It looks like a metal skeleton structure, and serves as a best possible basic framework. The assembly was carried out with the help of installation guides and layout plans. To ensure precise mounting, fixed points for the length and width were required at the structural soffit. This was the only way for the drywall installer to implement the individual steps necessary for attaching this framework to the structural soffit. The specialists from Vogl offered their professional consultations during the entire process.

To install the skeleton structure, lifting platforms were required – with a height difference between 2.80 and 6.00 m. The installer had to conduct measurement during each work step. Due to this, all height dimensions were considered, and the exact position of the frames was then lasered in order to ensure optimum installation of individual parts. This was the only option of mounting different correspondingly labelled metal grids. "The covering itself was similar to an arrangement of orange slices," as Mr Thiele puts it. With these work steps, smooth panel transitions for further processing could be achieved. Because, at the perimeters, it is the vaulted border friezes that add the accents here. Stylish illuminated columns manufactured on the basis of the VoglVariety product line act as a visual highlight – and make the interior of the railway station seem transparent. The pleasant room impression is emphasised by mosaic ornamentation acting as a link to the vault ceiling. Smooth vaulting from the ceiling to the baffled vault ceiling was implemented with L-angles and customised moulded gypsum components.

The Delft railway station is a place of cultural pleasure where the travellers can get away from it all for a tiny moment on their way to the train.