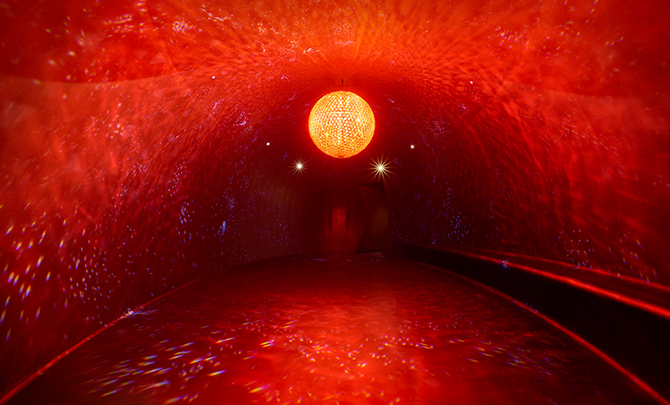 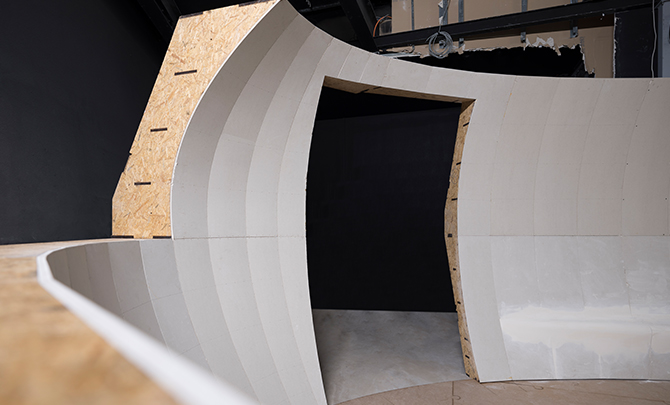 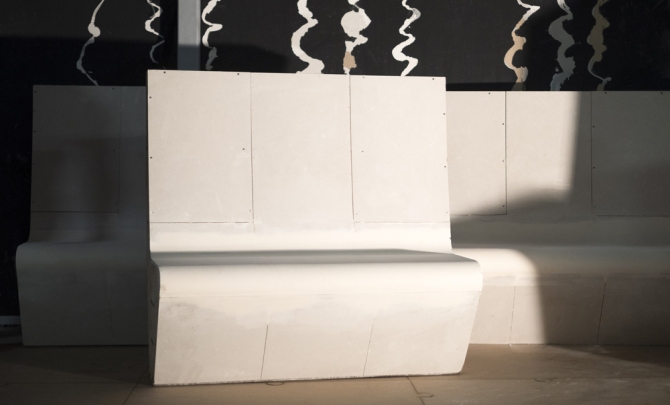 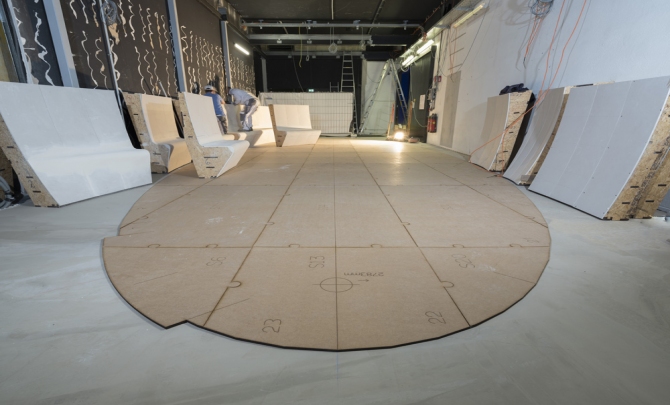 In November 2017, the installations of four Chambers of Wonder in Swarovski Crystal Worlds (Wattens/Tirol) were re-staged. In the El Sol Chamber of Wonder, moulded components by Vogl Deckensysteme gave fascinating contours to the elliptically shaped room, and made the eponymous shining artwork by the Mexican star architect Fernando Romero the centre of attraction.

Swarovski Crystal Worlds in Wattens turn Swarovski crystals into an experience of eternal transformation and re-invention. Since their opening in 1995, Swarovski Crystal Worlds have attracted more than 14 million visitors and are thus one of the most popular sights in Austria. The Chambers of Wonder in the iconic Giant form the heart of the attraction. Internationally recognized artists have an opportunity here to interpret crystal in their own unique ways. In late 2017, four of these rooms received new installations bringing astonishing moments of wonder with sparkling details, vibrant colours and virtual encounters.

One of these four new Chambers of Wonder - El Sol (Spanish for "the sun") - is named after the artwork at the heart of it formed from 2,880 custom-made Swarovski crystals. At the core of the artwork, there is a sphere of LEDs, whose light is split by the inner facets of the precisely cut crystals in such a way that it creates a dynamic surface reminiscent of the sun. The inspiration for El Sol was the remarkable geometry of the pyramids built by the Aztec and Mayan people. This piece of art is thus an homage to the cultural heritage of the Mexican artist Fernando Romero that creates a breathtaking atmosphere in the elliptically shaped 124 m² room.

From a model to an accomplished spatial composition

At first, a 2D model was drafted, and then a 3D model was developed on its basis. This served as a pattern to subsequently craft the elements following a frame technique. A detailed layout plan served as an installation outline, and provided an overview of the individual assembly steps. It even included the required fixing points.

To create the intended room appearance later on, accurately fitting spreading templates were initially distributed on the floor by Graup Gips-Bau GmbH - the executing drywall contractor from Innsbruck - and the bench was fixed. On this basis, the cladding of the Chamber of Wonder was gradually taking shape. The upper section of the ellipsoid forming the passage way from one Chamber of Wonder to the next in Swarovski Crystal Worlds was furnished with an oval plasterboard element that was joined together with the other parts.

"For drywall construction works, we used curved elements with a smooth surface. The resultant cross joints were closed with the joint compound. Due to the subsequent application of a 2-mm plaster layer, a homogeneous ceiling appearance could be achieved," as Mr Graup - managing director- describes the practical part.

This is how fragmented elements in this elliptic Chamber of Wonder turned into a perfectly shaped single entity within two weeks. Accurately prefabricated moulded components by Vogl Deckensysteme were a significant factor of quick accomplishment of the project. 8 to12 employees worked in a multi-shift operation around the clock to accomplish the job on time.

The accurately sized moulded components manufactured by Vogl Deckensysteme glamorise the luminous El Sol installation with a beautiful shape, and day-after-day create an atmosphere of surprise, fascination, and new horizons in store.